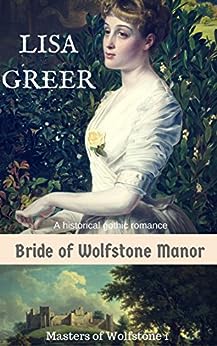 Is her husband of convenience a man…or a beast?

In Victorian England, 20 year old Anne Cumberfield has lost everything because of her father’s gambling debts. A distant relative, Lord Wolfstone, Ignatius Wright by his given name, makes an arrangement with her father; he is in need of a wife for propriety’s sake, and Anne needs to be married or put into service. With little say in the matter due to her father’s controlling nature, Anne is married off to a man she has never seen and is sent to the strange and isolated moors of North Yorkshire.

While the mysterious Lord Wolfstone is alluring, all is not well at Wolfstone Manor. Anne decides to make the best of her situation and to try to become a true wife to Lord Wolfstone. But strange howls in the night, dark secrets, and murders from the past rise up to haunt the new bride. Will Anne live to learn the bloody family secret, and if she does, will she be able to love the beast who shares her bed?