New Release Today and the Cover Art of Barrymore Tebbs

Today is release day for the fourth serial in my Delia Daugherty series, “The Haunted Dunes.” I’ve so enjoyed writing these fun little stories!

The woman’s crying haunts her nights…Delia Daugherty’s work on the library at Gulf Goddess, a lovely Destin mansion, has taken an ominous turn. Can she trust her employer, handsome Beau Benton, who is rumored to have been in love with a young girl who disappeared?
During a late night walk on the beach, Delia will learn the answer to who is crying in the night–ghost or human. But someone doesn’t want her to find out. Can Delia trust Beau, Belle, or Breeze Benton and put the ghostly woman who walks the dunes to rest?

**This is a 5600 word gothic romance serial. You can jump in reading the set anywhere. The others in the collection are
#1 Menace at Mistwood
#2 Lady of the Lighthouse
#3 Whispers beneath the Waves

And coming in August of 2012–Ghosts of the Past.

Buy Link to FREE copy of Menace at Mistwood, Serial #1 in the set. Today is the last day it’s free:

Here’s the fabulous cover art by Barrymore Tebbs. He’s an author of psychological gothic fiction, and he really knows how to capture the mood I’m going for with the font he uses and other touches:

The other serials in the series also have covers by Barrymore: 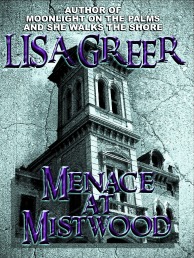 Whether you’re hooked on Mad Men or The Walking Dead, or Downton Abbey is more your speed, Americans are having a love affair with cable TV series. The audience for these three shows, and dozens of others, is vastly different, but they all have one thing in common which keeps viewers tuning in, saving them on DVR, and pre-ordering the DVD sets: the writing.

Granted, script writing is different from writing novels and novellas, and scripts for television series are different from movie screenplays. But no matter what your medium, writers share a few responsibilities to deliver to their target audience: tell a great story peopled with larger than life characters, and leave your audience clamoring for more.

Beginning fiction writers often make a common mistake – writing about everyday people with uninteresting lives. Page after page of following your character through his daily routine isn’t character development, it’s boring. Readers don’t turn to stories, no matter what the medium, to see themselves. It’s fine to create an Everyman and show him going about his day to day activities before setting up the story catalyst… but you’d better get through it quick and make something happen to lift him out of the mundane.

Take a look at Walter White in Breaking Bad. This guy is as ordinary as they come. He’s a middle class white guy with a family and a house in the suburbs with a two car garage. He has a lame job as a high school chemistry teacher. Ho hum. He discovers he has lung cancer. Boo hoo. We’re all dying of one thing or another. Even if you’ve never seen the show, you know what becomes of Walter White.

But imagine if the first episode began like this: Walter goes to school. Walter teaches class. Kids are bored. He picks up his son after school. He goes to the doctor and gets the bad news. How fast would we switch the channel? What did the writers do with the first episode? They started it at a critical point later in the episode’s story line (and continued this technique through later episodes)… they showed us a man running through the New Mexico desert without pants. Within a matter of minutes, we as an audience know there is something completely out of the ordinary about this guy, and we are hooked.

As a writer, your responsibility is to hook your reader from page one. We live in an instant gratification society. You may write the loveliest prose in the world, but if someone starts your book and isn’t snagged, they’re going to turn on the TV, get on Facebook, text, or worse, start reading someone else’s book.

Give your readers a reason to read your book. Immediately.

OK, so you’ve got a great character. He’s mean as a polecat, but incredibly good-looking, like Thomas the Footman on Downton Abbey, or he’s an uber-stud like Don Draper on Mad Men who smokes and drinks his way through season one while juggling two affairs and sex with his Barbie doll wife. Dude, come up for air! Where would Mad Men have gone if Don Draper lived the good life and was faithful to Betty? Nowhere.

Let’s take a look at one of my favorite TV characters, Deb Morgan from Dexter. Viewers tune in every week not just too find out how Dexter will manage to pull through another episode without his secret being revealed, but also to hear what atrociously obscene things come out of his sister’s mouth. Yes, Deb is a dedicated and talented cop who shares her brother’s grief for their father’s untimely deat. But aside from her colorful mouth, do you know what really makes Deb Morgan pop as a character? Her failed relationships. Season after season she is thrust into new relationships and blows it every time. Because Dexter is a series and not a finite piece of fiction, this will happen over and over until the show comes to its conclusion.

The writing of Deb Morgan’s character and her story arcs is a prime example of the old adage, put your character in a tree and throw rocks at him. Another great example is Jesse Pinkman from Breaking Bad. Look at his predicaments in the season two episode, “Down”.  Jesse has been living in his late aunt’s house, believing it to be his. His parents take ownership and kick him out. Jesse turns to Paul, a buddy from high school who agrees to let Jesse crash at his place. But Paul has cleaned up his own act. He has a house in the suburbs, a child, and a wife who immediately puts the kibosh on Jesse’s plans. Jesse parks his motorcycle outside a mini-mart where he calls his buddy, Badger, who also denies him a place to stay. Coming out of the mini-mart, Jesse’s motorcycle has been stolen! What could possibly go wrong next? With nowhere else to go, Jesse scales the fence into the lot where the repaired RV awaits Jesse’s payment. He lands precariously on top of a porta-potty and the next thing you know, he is covered in feces and blue chemicals. This is, of course, an extreme example of how to beat up a character, but if it were written in a book, your readers would not be able to turn the pages fast enough.

There is an interesting phenomenon that’s all too common these days: an independently published book has dozens of four and five star reviews. We read a few pages of the sample and it’s a riot of bad grammar, typos and punctuation errors. But people are not only buying it, they are giving it great reviews. What’s the secret? It’s certainly not the prose, but I guarantee it has two things going for it, and those two things make all the difference in the world: great characters and a great plot.

So what are you going to do? Continue writing mundane stories about uninteresting people and run the risk of readers moving on to the next shiny object? Or are you going to take a cue from the TV shows we’ve all become addicted to and create memorable characters and page-turning plots? If you want the sales and the buzz, the choice is yours.